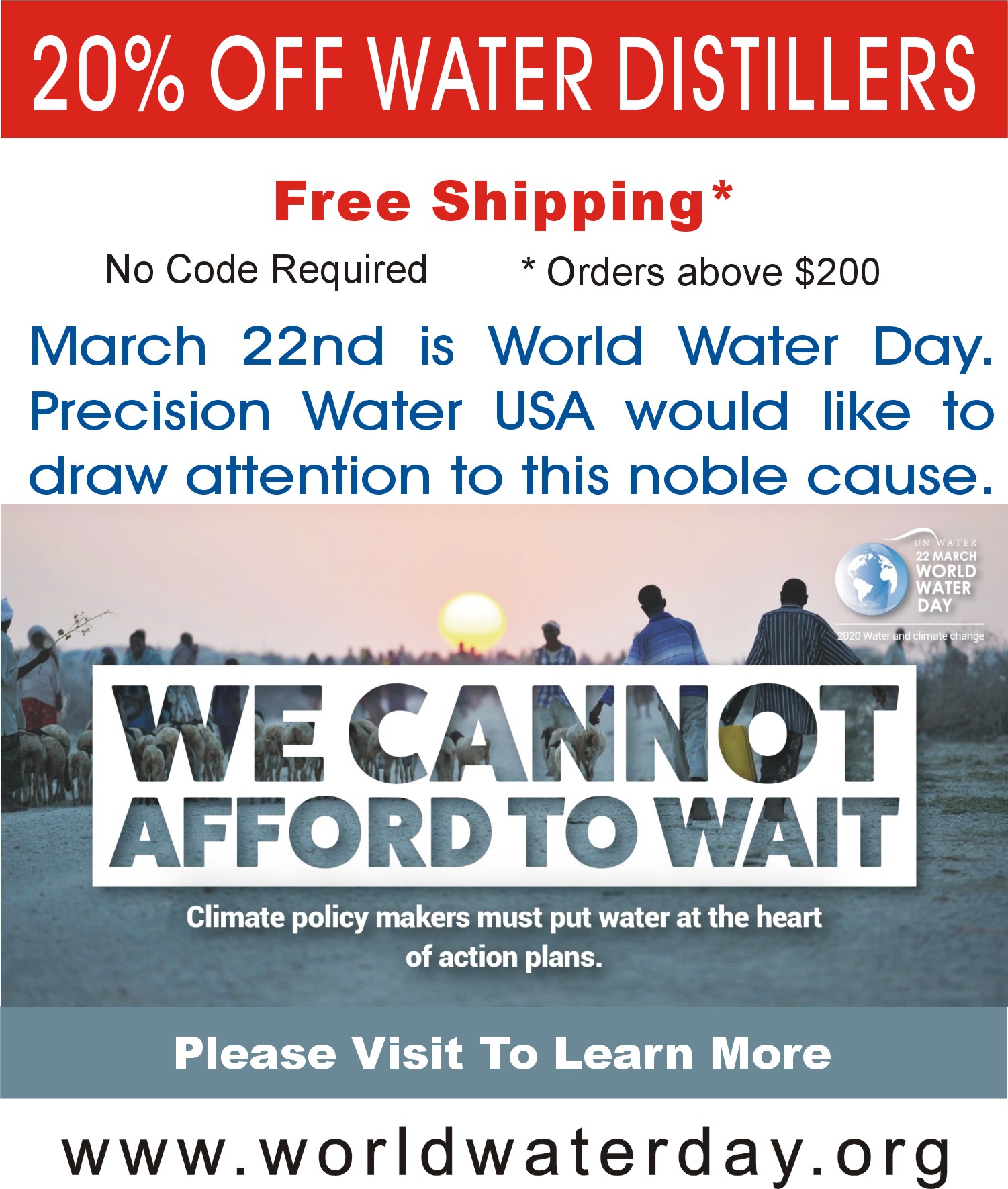 Mother Nature produces water through a natural cycle of evaporation, precipitation, and condensation. The sun heats water lying in the bodies of water upon the earth. Water vapor then evaporates into the sky and is captured in the clouds. As the clouds cool, they release the water as a form of precipitation. As the water makes its descent to the earth, it picks up the various pollutants found in the air. This water continues to pick up contaminants from the soil on its way back to various bodies of water. Distillation duplicates the original process of Mother Nature. Like Mother Nature, the distillation process first boils the water. As the hot water vapor rises, it is captured in the baffle and then enters the cooling coils. As the steam makes its way through the coil, a fan cools the hot vapor into condensed pure water. The distillation process is a human-controlled version of the hydrological cycle. Distillation uses the process of evaporation, cooling and condensation to “drive out” water molecules from other unwanted substances or contaminants. Also, because distillation boils the water, all bacteria and viruses are killed. Everything else is left behind in a boiling tank to be thrown down the drain.

The first residential water distiller was designed primarily to remove dissolved solids and inorganic salts. As more “sophisticated” chemicals were created by man, the need evolved for further advancements in distillation equipment. Many distillers today utilize a volatile gas vent, which consists of a pinhole in the top of the condensing coils to vent off any unwanted gases. If any gases happen to escape this vent, then a carbon postfilter will trap them. These charcoal filters provide double assurance that these gases will not end up in the distilled water storage tank. These filters do not breed bacteria, as only pure water passes through them. There is no other process proven as efficient or as reliable as distillation. Water distillation will remove chlorine, nitrates, fluorides, ammonia, aluminum, arsenic, copper, iron, mercury, radium, asbestos, viruses, bacteria, herbicides and pesticides.

Most distillers do not require the constant monitoring that other water treatment methods do. Since the distillation process is so simple, there is little that can go wrong. Quality distillation systems are constructed of high-grade stainless steel. Built to last a lifetime, a distiller will consistently deliver the same quality of pure drinking water over the years, with few or no service problems. Maintenance of a distiller consists of draining out the residue left over from the boiling process and changing the charcoal filter every 6 to 12 months. If a heavy scale build-up accumulates in the boiling tank, a cleaning agent is required to soften and loosen the scale.

Easily and efficiently removes toxic chemicals, heavy metals, bacteria, viruses, parasites such as cryptosporidium, and other contaminants that are harmful to our health. More effective than reverse osmosis systems in contaminant reduction, even with high levels of pollution. Does not rely on physical barriers (e.g., filters) which can fail, letting  contaminates pass through into the treated water. Produces consistently high quality water for the lifetime of the unit, i.e., the quality does not decline with use. Distillers do not require a complicated disinfecting process when used on water containing bacteria. Producing your own water assures that you have control over the finished product (unlike buying bottled water).

Distilled water is the purest drinking water — free from chemicals, impurities, and pollutants – so it simply tastes better!

Even your pets will appreciate distilled water!

Distillation is a process whose time has come! It is highly efficient, reliable, available, and crucial to the pursuit of good health. If it has been awhile since you’ve checked distillation out - or if you never have - now is the time!

We Sell Other Parts Too!